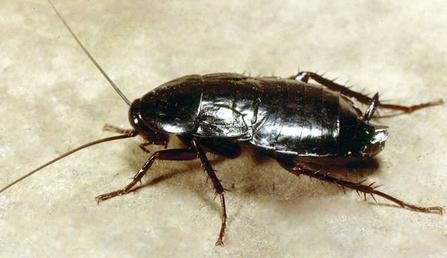 If you feel you may have a problem with cockroaches, please feel free to call us any time Mon-Fri 8-5

​Do you have a roach problem?

Cockroaches are one of the most commonly noted household pest insects. They feed on human and pet food and can leave an offensive odor. They can also passively transport microbes on their body surfaces including those that are potentially dangerous to humans, particularly in environments such as hospitals. Cockroaches are linked with allergic reactions in humans. One of the proteins that triggers allergic reactions istropomyosin. These allergens are also linked with asthma.

General preventive measures against household pests include keeping all water and food stored away in sealed containers, using garbage cans with tight lids, frequent cleaning in the kitchen, and regular vacuuming. Any water leaks, such as dripping taps, should also be repaired. It is also helpful to seal off any entry points, such as holes around baseboards, between kitchen cabinets, pipes, doors, and windows with some steel wool or copper mesh and some cement, putty or silicone caulk.

Cockroaches are insects of the order Blattodea, sometimes called Blattaria. Cockroaches live in a wide range of environments around the world. Pest species adapt readily to a variety of environments, but prefer warm conditions found within buildings. Many tropical species prefer even warmer environments. Cockroaches are mainly nocturnal[13] and will run away when exposed to light. A peculiar exception is the Asian cockroach, which is attracted to light. Cockroaches leave chemical trails in their feces, as well as emitting airborne pheromones for swarming and mating. These chemical trails transmit bacteria onto surfaces. Other cockroaches will follow these trails to discover sources of food and water, and also discover where other cockroaches are hiding. Research has shown group-based decision-making is responsible for complex behaviors such as resource allocation. In a study where 50 cockroaches were placed in a dish with three shelters with a capacity for 40 insects in each, the insects arranged themselves in two shelters with 25 insects in each, leaving the third shelter empty. When the capacity of the shelters was increased to more than 50 insects per shelter, all of the cockroaches arranged themselves in one shelter. Researchers found a balance between cooperation and competition exists in the group decision-making behavior found in cockroaches. The models used in this research can also explain the group dynamics of other insects and animals.

Female cockroaches are sometimes seen carrying egg cases on the end of their abdomens; the egg case of the German cockroach holds about 30 to 40 long, thin eggs in a case called an ootheca. The egg capsule may take more than five hours to lay and is initially bright white in color. The eggs are hatched from the combined pressure of the hatchlings gulping air. The hatchlings are initially bright white nymphs and continue inflating themselves with air, becoming harder and darker within about four hours. Their transient white stage while hatching and later while molting has led many to claim the existence of albino cockroaches.

A female German cockroach carries an egg capsule containing around 40 eggs. She drops the capsule prior to hatching, though live births do occur in rare instances. Development from eggs to adults takes three to four months. Cockroaches live up to a year. The female may produce up to eight egg cases in a lifetime; in favorable conditions, she can produce 300 to 400 offspring. Other species of cockroaches, however, can produce an extremely high number of eggs in a lifetime; in some cases a female needs to be impregnated only once to be able to lay eggs for the rest of her life.