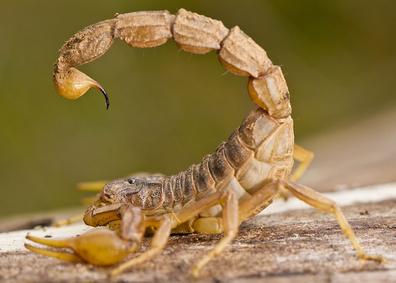 Three species of scorpions are commonly found in the Arizona Upland subdivision of the Sonoran Desert. They are the bark scorpion, Centruroides exilicauda, the striped tail or devil’s scorpion, Vaejovis spinigerus, and the giant or desert hairy scorpion, Hadrurus arizonensis.

Although more than 30 species of scorpions are found in Arizona, only the sting of the bark scorpion is considered to be truly life threatening. Its slender shape, and its long, delicate pincers and tail distinguish it from other more stoutly-built species in the state. Of the three most commonly seen species, the bark scorpion is the only one that prefers to climb, and it may be found many feet above the ground on trees and rock faces. A scorpion uses its venomous sting primarily to subdue insect prey. It also uses the sting defensively, readily stinging a predator or the mistakenly placed bare foot.

One of the most fascinating things about scorpions is that they fluoresce under ultraviolet light, probably due to the complex substance in the epidermis that makes it impermeable. To truly appreciate the lives of scorpions, take a black light out to the desert on a warm, moonless night. You’ll be amazed at how common scorpions are in the undisturbed Arizona Upland habitat. You can also use this technique to observe these ancient nocturnal arachnids as they detect and capture prey, court and mate, and dig burrows. These behaviors are never seen when scorpions are encountered by turning over rocks and other materials where they spend the daylight hours. Not only can you find scorpions in nature using ultraviolet light, you can use this same technique to look for scorpions in and around your home.

Do you have a Scorpion problem?