Spiders are the largest order of arachnids and rank seventh in total species diversity among all other orders of organisms.[1] Spiders are found worldwide on every continent except for Antarctica, and have become established in nearly every habitat with the exceptions of air and sea colonization. While the venom of a few species is dangerous to humans, scientists are now researching the use of spider venom in medicine. Arachnids differ from most other arthropods in having no antennae. All adult arachnids have four pairs of legs and have no wings. They usually lack mandibles, having instead fang-like mouthparts to pierce and break up prey. While most spiders are venomous, few are dangerous to humans. In Arizona, only the widows (black widow) and the brown spiders (brown recluse types) have venom dangerous to people. Other species may bite and cause some local swelling, but unless one is allergic to the venom, no medical attention is necessary.

Venom in spiders has two functions: prey capture and defense. In its most common use, spiders bite their prey and inject venom, which immobilizes the prey and starts the process of digestion. Spiders have no teeth and rely on the venom to liquefy their prey in order that their stomachs, known as sucking stomachs, can draw in the meal. Some of the larger spiders, such as tarantulas and wolf spiders, have projections on the inside of their chelicerae that help break the prey into smaller pieces to aid digestion. These hunting spiders typically leave a small pellet of crushed exoskeleton after eating, whereas the smaller web-building spiders leave an empty shell of the former prey, neatly cocooned in silk.

The second function of venom is for defense. A spider that is threatened by restraint or by touching may bite. The spider controls the amount of venom injected and may inject none at all. A black widow could bite when its hiding place under a rock or a log is exposed. People are sometimes bitten by brown spiders that have taken up residence in clothes that have been left piled on the floor or in a tent overnight. 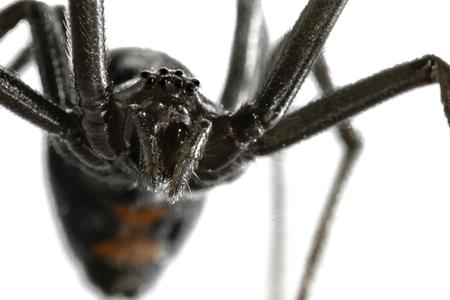 If you feel you may have a problem with spiders invading your home, garage, or yard, feel free to contact us Mon-Fri 8-5

Do you have a spider problem?